Transcript of Fashion in Ancient India 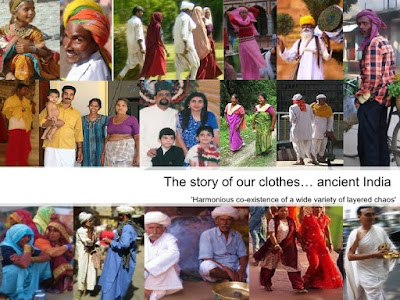 Indian Costumes from the ancient era to the present may have one or more of the following characteristics.
– Wore mostly Cotton. It was the first place where cotton was grown in 2500 BC in the Harappan Period
– Mentions of draped fabric clothing date back to Indus Valley Civilization (2800 to 1800 BC) Women Sari (meaning cloth)- a long piece of cloth that can be wrapped several ways around the body
– Designed to be efficient and ready to wear
– Universal; worn like skirts, veil, or pants
– 5-9 yards long
– Commonly made of cotton, wealthy women wore silk and this formed part of Fashion in Ancient India.
– Young women wore bright colors, women in mourning wore white
– Traditional way of wearing the sari is still present today, with modern aspects incorporated depending on the latest trends Men Dhoti – long piece of cloth designed to cover the legs – it passes between the legs and is tucked behind
– Common in ancient times but not typically worn by the average working man today
– Did not cover the chest and shoulders
– Men combined these with turbans Turban – headdress specifically worn by men
– Referred to as a Pagri in India
– Various styles depending on religion and region where it is a practice to wear one
– Different styles include the Sikh turban – Dastar and the Pheta, worn in Maharashtra Persian influences Both men and women began to wear trousers with long tunics worn over them down to their knees
– Churida: trousers worn with tunic
– Salwar: loose trouser narrowing down to the ankle with a draw string waist
– Kurta: shirt for men worn with salwar – a straight cut long shirt/tunic
– Kameez: shirt for women worn with salwar; a long tunic top
– Dupatta or shawl is worn to complete the suit Other Important Indian Cultural Elements Bindi – ornamental mark on the forehead between the two eyebrows
– Southern India – girls choose to wear the bindi whereas in other parts of India it is required by married women
– Sign of marriage and guarantees social status
– Area between eyebrows is the 6th chakra and the seat of concealed wisdom
– Center point where all experiences are gathered in total concentration Gold – popular since ancient days in India
– Worn on skin at all times
– Has the power to purify anything it comes in contact with Conclusion In conclusion, Fashion in Ancient India has stayed consistent through all modern times. Many designs, fabrics, and styles of clothing have been unchanging with a few modern alterations. Traditional Indian culture remains very present in modern society and has been embraced in every corner of the globe. Many of today’s style of clothing can be traced back to ancient India due to their innovative and timeless sense of fashion. – Aryan period: Sari was first mentioned in the Vedas about 600BC
– 2nd to 3rd Century BC: Dhotis appear in sculptures in Southern India
– 19th-20th Century BC: Sari becomes the symbol of the Indian nation
-1000 AD: Persian fashions influence clothing and become especially popular in northern India
– 20th Century AD: Indian clothing takes political significance because of Mahatma Gandhi.
Now there are some pertinent questions to ponder over in our present society in regards to Indian Costumes and Indian fashion, which may be highlighted as follows:-
1. Why do you think Indian men refrain from wearing traditional Indian attire in Western society today?
2. Typically you would see Indian women in their traditional attire more frequently than men. Why do you think that is?